You are here: Home 2013 February To Answer the Questions from Cisco Nexus 1000V InterCloud Users and Analysts

As part of a major cloud launch that also introduced the Nexus 6000 series and updates to our Cisco ONE portfolio, Cisco unveiled its Nexus 1000V InterCloud solution, which provides a seamless and secure extension of virtual networks from on-premises data centers to cloud service providers. 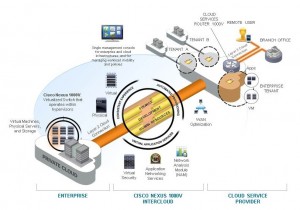 Q: What is Nexus 1000V InterCloud? What part of the hybrid cloud infrastructure does it comprise? Is it software, hardware, some combination of both? Is it a switch, a server or an application?

A: Nexus 1000V InterCloud is a set of software components that run as virtual machines on a variety of servers. It forms the infrastructure that extendss your existing on-premises virtual network and virtual services to cloud providers in a seamless and secure manner. It provides all the infrastructure and protocols to support VM migration from the data center to the cloud provider. Effectively, Nexus 1000V InterCloud (with VNMC InterCloud management software) creates a secure, on-demand layer-2 virtual private cloud (VPC).

A: Nexus 1000V is a virtual switch deployed to achieve physical Nexus switching and operational consistency for virtualized environments. Nexus 1000V InterCloud extends that virtual network infrastructure to cloud providers in a seamless and secure way, even allowing for VM and policy migration across the resulting hybrid cloud. As virtual machines are instantiated in the VPC, the operational model is exactly the same.

So, you do not need to replace, upgrade, augment or otherwise mess with your existing Nexus 1000V virtual switches that are happily supporting your data center today. In fact, Nexus 1000V InterCloud, despite the name, will support most virtual networking infrastructures, even if there are no Nexus 1000V virtual switches present. You may be using VMware’s vSwitch (and Microsoft’s Hyper-V switch in future). You can still extend that virtual network to the cloud through Nexus 1000V InterCloud.

Q: What components are included in Nexus 1000V InterCloud?

A: Two of the major components are: 1) the secure, encrypted communications channel that creates the InterCloud Link from the enterprise to the cloud provider, plus an overlay InterCloud Switch in the VPC (provider cloud), and 2) the new VNMC InterCloud management platform that provides a single view of the enterprise and cloud resources and provisions network services consistently across sites. While not formally part of Nexus 1000V InterCloud product bundle, the whole resulting hybrid cloud environment will also support virtual services in a phased manner, like Virtual Security Gateway (VSG), ASA 1000V Cloud Firewall, virtual Prime NAM, virtual WAAS, as well as ecosystem services. All of the familiar features of Nexus 1000V switches are available in the InterCloud Switch — VLANs, security ACL’s, QoS, as well as the vPath service insertion and chaining architecture integrated with VSG, ASA 1000V and vWAAS.

Q: How complex is it to manage the integrated hybrid cloud environment and what tools does Cisco provide or include with Nexus 1000V InterCloud?

A: One of the strengths of this new hybrid cloud solution is the ability to get a single view of the multiple hybrid cloud sites and manage VM mobility and cloud network service policies as easily as has been done within a single enterprise data center or private cloud. The management platform, Cisco Virtual Network Management Center (VNMC) InterCloud offers new capabilities including:

VNMC InterCloud accomplishes this by integrating into enterprise VM management tools (e.g. VMware vCenter and, in the future, Microsoft SCVMM), and cloud provider APIs (e.g., Amazon AWS APIs, and in the future APIs of other cloud providers).

Q: How is the Nexus 1000V InterCloud unique of different from existing hybrid cloud solutions?

A: The following aspects of Nexus 1000V InterCloud give it unique advantages compared to other hybrid cloud solutions:

Thus Nexus 1000V InterCloud truly creates a virtual data center in provider cloud having characteristics and posture very similar to those established for enterprise cloud workloads.  Having such extensive consistency also helps reduce operational cost, as no new training and knowledge is required for operations teams.

Q: Nexus 1000V InterCloud includes Layer-2 network extension capability, much like Cisco’s Overlay Transport Virtualization (OTV) technology? Are they functionally the same, or are both needed?

A: There are a lot of similarities and, yes, both solve the problem of layer 2 extension over a multi-site cloud network. However, OTV is suitable for extending data center networks while InterCloud is suitable for hybrid clouds (including where administrative domains are different).  OTV supports both physical and virtual applications, whereas InterCloud is primarily for virtual workloads. InterCloud also has additional features in support of hybrid clouds, such as a fully encrypted connection and is managed through VNMC InterCloud, which integrates with VM management tools and cloud orchestration applications.

Q: Does my cloud provider have to do something in order for me to use the Nexus 1000V InterCloud?

Q: How is the Nexus 1000V InterCloud licensed and deployed?

A: Nexus 1000V components are software deployed as virtual machines. It is architected to provide complete deployment flexibility.  Enterprise customers can purchase it as a product and deploy it on their own.  Service provider customers can offer this as a service in a variety of ways: a new service for their managed/hosted customers, as well as a managed hybrid cloud services (i.e., managed VPC services) to any customer.

Q: What’s the capital of Mongolia?

A: Ulan Bator (you almost had me that one!)

More Notes: So, we hope that clarifies a majority of the outstanding questions that this week’s Nexus 1000V InterCloud generated. We are getting a lot of positive feedback from folks interested in hybrid cloud and the promise that this seamless and automatic degree of integration holds for customers. If you have any more questions, we’d be happy to hear them. You can always send questions (via email) to ask-nexus1000v-pm@cisco.com, via twitter to @Official_1000V, or just drop us a comment in the form below.