You are here: Home 2013 July Cisco vs. Juniper: How Different are Their SDN Strategies?

Cisco Live last week welcomed about 22,000 attendees to Orlando, with an additional 250,000 attendees participating virtually–record participation for this long-running and always-exciting event! CEO John Chambers admitted the company was late to respond to the call of SDN, but partners expressed faith in the Cisco SDN strategy and are looking to hear more from the company on network programmability.

On the surface, Cisco and Juniper’s SDN strategies seem to have sharp contrasts if recent announcements are any indication. For example:

• Juniper places much more emphasis on the software angle of SDN, even ushering in a new software licensing business model; Cisco’s attempts to make hardware as much, and perhaps even more, relevant than software.

• Juniper views SDNs as much more disruptive, potentially allowing it to significantly increase share; Cisco has thus far made no such dramatic market impact statements regarding SDNs.

Juniper’s MX series routers will be among the first of the company’s hardware platforms to include new ASICs otimized for SDNs. 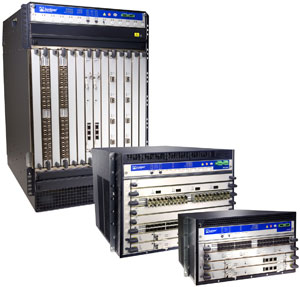 • As part of its hardware focus on SDN, Cisco is funding a separate spin-in company — Insieme Networks — which is believed to be building big programmable switches and controller(s); Juniper has no such hardware investments, but did buy Contrail for $176 million, again emphasizing the software aspect of SDNs.

• Cisco has a timeline of 2013 deliverables; Juniper’s timeline pushes a controller and SDN service “chaining” capability out into 2014, and the new software business model into 2015.

Yet analysts say there are really more similarities than differences in both strategies from the fierce rivals.

“I think there are some similarities,” says Brad Casemore of IDC. “Both Juniper and Cisco are emphasizing ASICs, and therefore hardware, in their SDN strategies. Both companies also see network and security services–Layer 4-7–as virtualized applications in a programmable network. They each have controllers, but they also will promote hybrid control planes–decoupled and distributed. Juniper is positioning for a software-licensing business model, true, but it’s relatively early along in that process.”

“It’s a different packaging strategy but both seem equally focused on the value of software in SDN,” says Mike Fratto of Current Analysis. “Key points being modular, flexible, and exposing APIs for integration.”

Juniper recently divulged its SDN strategy after months of silence – seven months after Cisco announced its Cisco ONE plan. Salient points of Juniper’s plan include separating networking software into four planes–Management, Services, Control and Forwarding — to optimize each plane within the network; creating network and security service virtual machines by extracting service software from hardware and housing it on x86 servers; using a centralized controller that enables service chaining in software, or the ability to connect services across devices according to business need; and the new software-based licensing model, which allows the transfer of software licenses between Juniper devices and industry-standard x86 servers, and is designed to allow customers to scale purchases based on actual usage.

Cisco’s ONE, or Open Networking Environment strategy, includes an API platform to instill programmability into its three core operating systems: IOS, IOS XR and NX-OS. It’s focused on five key markets and also includes new programmable ASICs, like the UADP chip unveiled with the new Catalyst 3850 enterprise switch; and a software-based controller for data centers that runs on x86 servers. New ASICs are also expected to be front-and-center when the Cisco-funded Insieme Networks start-up unveils what’s expected to be a high-performance programmable switch and controller line.

Cisco Catalyst 3850 features a new programmable ASIC that enables the switch to participate in a Cisco ONE SDN. 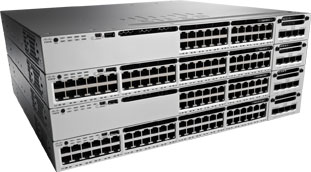 Juniper’s strategy initially targets data centers, and its new software licensing model is based on enterprise practices. The company will expand its traditional carrier and service provider customers from there.

Among the first markets addressed in Cisco’s ONE strategy are enterprise customers, data centers and cloud providers.

“Juniper ultimately sees SDN at all layers of the network, spanning not only the data center — edge/access and core –, but also the WAN, campus and branch,” says IDC’s Casemore. “Juniper’s SDN road map initially targets the SP edge and data center, but it does plan to follow SDN into other areas.

“Cisco sees data center and cloud as near-term markets, and its positioning to play across the board as SDN — and its outcomes, network virtualization and network programmability — extends its reach,” Casemore says. “Again, there are many similarities.”

In terms of market disruption, Fratto says both companies see SDN as perhaps equally disruptive even though one has been much more vocal about that impact than the other.

“I think the two companies view SDN as disruptive but they are approaching it very differently,” he says. “Juniper tends to be more conservative in bringing new products to market, particularly with Junos. They have a quarterly software update cycle and they march to that drum. I think they have a strong preference for stability in the platform and based on their consistent messaging on that topic.

“I think for Cisco, the disruption is there but the recent announcements tell a lot about its direction going forward,” Fratto continues. “I think it signals … wanting to be vendor and protocol agnostic vs. promoting their own technology over others. The ONE controller, for example, is modular and will support OnePK and Openflow out of the gate, but there is no reason other than development that it can’t support other protocols.”

Casemore sees both companies reacting to SDN developments, rather than driving them.

“Neither has led the charge toward SDN. Both are measuring their responses, trying to find a balance between supporting their customers today while preparing for potentially disruptive shifts.”

“Juniper has a lot of existing hardware, and hardware customers, that it will attempt to fold into its SDN strategy,” he says. “We will see hardware and software from both Cisco and Juniper, as their common ASIC strategies suggest.”

And even though the timelines for deliverables differ, they are in keeping with each company’s traditions.

“That’s Juniper’s way, right?” Fratto says. “Produce a road map and then deliver over a longer timeline like 12 to 24 months.”

Where the strategies diverge will be in partner ecosystems for SDN-enabled services, he says.

“In both cases, they will need to attract partners into their respective ecosystems. The market for services has a ton of players — think (application delivery controllers), firewalls, WAN optimization. For those services to be chained, they have to be integrated with Juniper’s stuff. Same for Cisco. That’s going to be the attractor.”

“I look at Juniper’s strategy as being more attuned to the SP/carrier community than the enterprise — their service chaining concept is very close to network functions virtualization — whereas the strategy and technologies Cisco has rolled out thus far are more enterprise oriented,” he says. “That’s not to say that Juniper won’t develop more of an enterprise orientation or that Cisco won’t push its SDN strategy into carriers — both will happen. But that’s how I see them now at this particular snapshot in time.”

Cisco’ Answer to SDN, Cisco ONE Introduced at Cisco Live