Cisco said that it had an aggressive migration program on tap for customers of its 15-year-old Catalyst 6500 to the new Nexus 9000 data center switch after it launched the Insieme product line last fall.

In the following part, Jim Duffy (He has been covering technology for over 28 years, 23 at Network World. He covers enterprise networking infrastructure, including routers and switches.) shared the main technical analysis and information with examples about this migration from Catalyst 6500s to the Nexus 9000.

Cisco defines a DCSS as one or many switches of any kind that are interconnected so that they collectively provide Layer 1 through 3 connectivity to servers and Layer 4 through 7 devices, and the applications that connect to them. That DCSS can also include firewall, application control and network analysis services modules in the switch chassis with internal connections to the switch.

The example migration in the web page is an access layer end-of-row configuration of Catalyst 6500s to an end-of-row (EoR) configuration of Nexus 9508 switches populated with 48-port 1/10Gbps cards. In planning and building the Nexus 9508 DCSS, some of the considerations are facilities for the deployment–power, cooling, rackspace, server and interswitch cabling; interoperability with VLANs, VRF instances, default gateways, security policies and ACLs; capacity planning, including east-west and north-south traffic patterns, and oversubscription; availability and failover; interoperability of protocol optimizations and new features, including Spanning Tree, IGP, EGP, multicast, QoS, classification and marking, and policing; and Layer 2 and 3 data center interconnection. 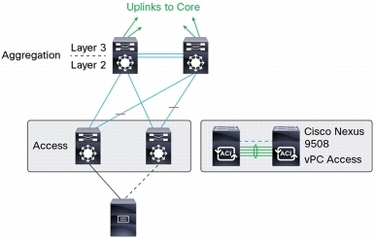 Now that the Nexus 9508 DCSS is built it’s time to interconnect the existing Catalyst 6500 DCSS. Considerations necessary for this include interoperability of Spanning Tree protocol implementations, and segmentation and security policies.

The Nexus 9508 supports Rapid PVST+ and Multiple Spanning Tree. Rapid PVST+ is backward compatible with Spanning Tree but it is difficult to convert all data center switches at the same time to Rapid PVST+ so a phased implementation is necessary, the document states.

For segmentation and security policy migration, Cisco recommends use of the Nexus Migration Tool to move application- and security-specific VLANs, VRF instances and ACLs for segmentation from the Catalyst 6500 DCSS to the Nexus 9508 DCSS for configuration on that system. Other considerations are Nexus 9508-specific features such as unicast, multicast, QoS, and VXLAN capabilities to be deployed according to application and business requirements. 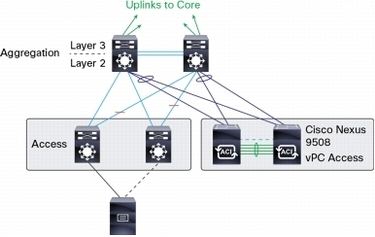 Once these connections have been established, the third and last step is server and end device connectivity. Matching Nexus to Catalyst downlink interface configurations should be straightforward but migrating 100 or more servers might be a change management challenge, the Cisco document cautions.

Cisco provides a sample template for vPC server connectivity in the web document, which would result in a configuration like this: 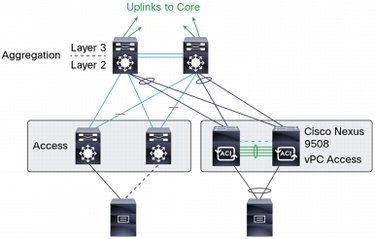 After all the servers are migrated, the Catalyst 6500 EoR access switches can be decommissioned: 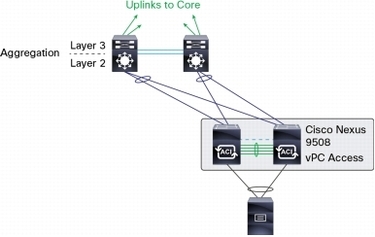