The Cisco Nexus 9500 platform consists of Layer 2 and 3 nonblocking Ethernet switches with the hardware capability to support Fibre Channel over Ethernet (FCoE)(Planned support through future software releases). With backplane bandwidth of more than 15, 30, and 60 terabits per second (Tbps) respectively, the Cisco Nexus 9504, 9508, and 9516 Switches support 1, 10, 40, and (future) 100 Gigabit Ethernet interfaces through a comprehensive selection of modular line cards. Configurable with up to 2304 10 Gigabit Ethernet or 576 40 Gigabit Ethernet ports, the switches provide sufficient capacity for both access- and aggregation-layer deployments.

The Cisco Nexus 9500 Series switches have a modular architecture that consists of switch chassis, supervisors, system controllers, fabric modules, line cards, power supplies and fan trays. Among these parts, supervisors, system controllers, line cards and power supplies are common components that can be shared among the entire Nexus 9500 product family.

The Cisco Nexus 9500 platform is built using the components illustrated in the following picture.

Cisco Nexus 9500 Platform System Controller: A pair of redundant system controllers offloads chassis management functions from the supervisor modules. It is responsible for managingpower supplies and fan traysand is a central point for the Gigabit Ethernet out-of-band channel (EOBC) between the supervisors, fabric modules, and line cards.

The chassis of the Cisco Nexus 9500 Series has an innovative midplane-free design. A midplane is commonly used in modular platforms as a way to provide connectivity between line cards and fabric modules. Being an extra piece of hardware inside the switch chassis, it obstructs the cooling airflow. Hence, additional methods need to be applied to facilitate an airflow path, e.g. cut-outs on the midplane or airflow redirection, which result in a reduced cooling efficiency. Nexus 9500 Series is the industry-first switch platform that eliminates the need for a chassis midplane. With a precise alignment mechanism, Nexus 9500 Series switch line cards and fabric modules directly attach to each other with connecting pins. Line cards and fabric modules have the orthogonal orientations in the chassis so that each fabric module is connected to all line cards and vice versa. Without a midplane blocking the airflow path, the chassis design delivers a maximized cooling efficiency. It also allows a compact chassis design without the need for large cooling fans.

The Cisco Nexus 9500 platform supports a variety of line cards, all of which can be configured in any combination 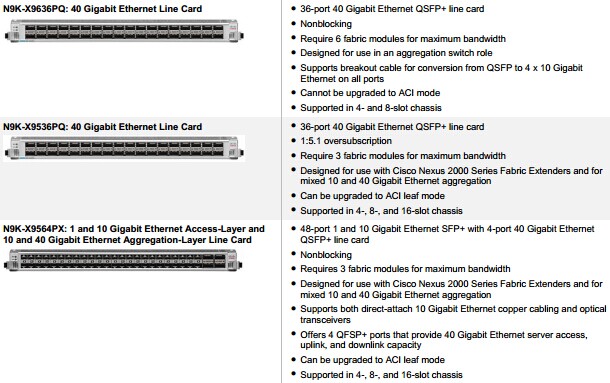 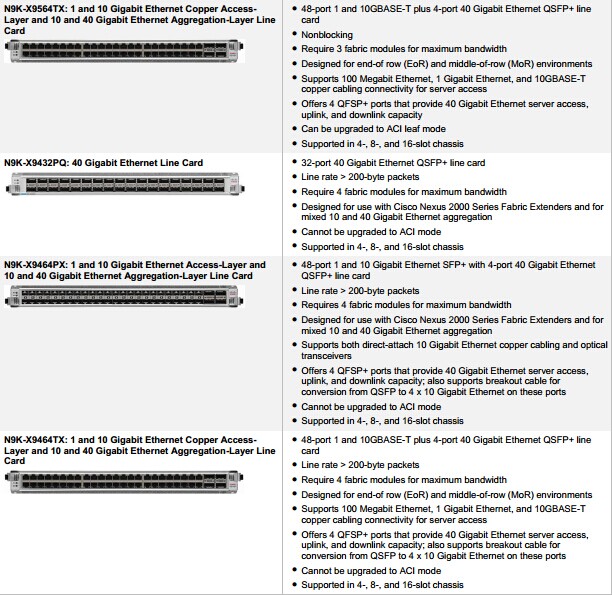 The midplane-free chassis design enables the maximum cooling efficiency. The combination of merchant and custom silicon allows the line cards to have the fewest number of ASICs while providing a record-setting performance. With innovations such as, the front-to-rear airflow, and the 80PLUS Platinum certified highly efficient power supplies, Nexus 9500 Series Switches set a new record for energy efficiency, reliability and performance for data center class switches.

By decoupling the intra-system management from the switch control plane, the Nexus 9500 Series Switches achieve a control plane of unprecedented stability. Equipped with a supervisor engine built with the latest multicore CPU, together with line card CPUs to offload tasks from the supervisor engines, Nexus 9500 Series Switches provide the foundation of a reliable data center switch.

Operating in the classic NX-OS mode, Nexus 9500 Series Switches run on a single image for all switches in the family, greatly simplifying network administration. While running on the latest 64-bit Linux Kernel with true process modularity, high software resiliency together with multiple enhancements in automation and programmability, the enhanced NX-OS for Nexus 9500 Series Switches is the best solution for data centers that seeks to modernize and automate data center network management and operating models.

With the above mentioned unique features, the Cisco Nexus 9500 Series Switches are the ideal data center switches to allow organizations to build a reliable, scalable, resilient and automated data centers.