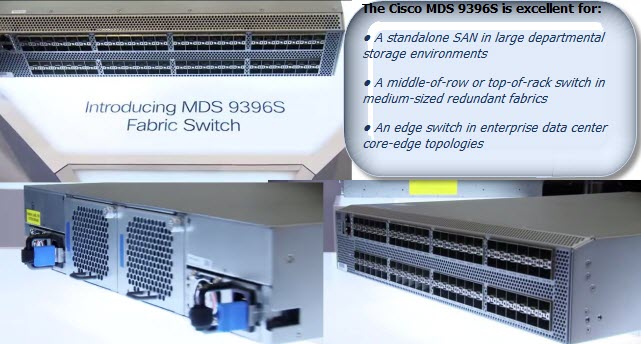 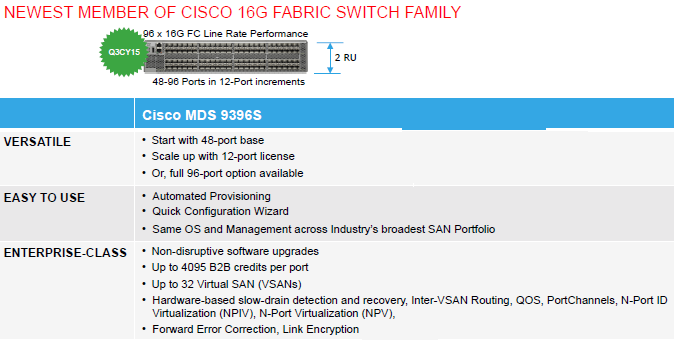 So why Cisco MDS 9396S? MDS 9396S is being introduced as a response to the adoption of all flash storage and increase in Data Center Storage demand. Additionally, Cisco indicates that their existing MDS 9700 and 9250i platforms now offer the highest performance 16G FICON capabilities on the market and support FICON Distance Extension using 10G FCIP and specialized acceleration technologies.

SMB customers will find they have enough ports to connect all the server and storage ports to a couple of MDS 9396S switches for high availability with room for future growth. While customers with larger SAN deployments can deploy the MDS 9396S as a Middle of Row switch and grow to hundreds of ports with fewer chassis. 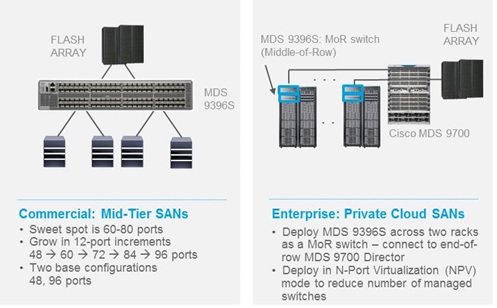 “In the past, Cisco MDS products have helped us scale and grow our storage infrastructure with consistent performance and manageability. Going forward, we are excited to see Cisco launching its next generation 16G High-density Fiber Channel Switch MDS 9396S, as it will help us meet our growing customer demand for IT outsourcing services in the banking and financial services sector”– Alessandro Spigaroli, Head of Project Engineering and DC Architecture at Cedacri

Because 10G/40G Converged Ethernet is deployed at the access, 16G line-rate FC deployed on Cisco MDS at the storage core, and 40GE spine-leaf architecture for IP storage traffic, Cisco indicates that their customers can now mix-and-match the various Cisco MDS, Cisco Nexus, and Cisco UCS products. As a result, this allows them to design a highly-efficient unified fabric architecture, which has the ability to adapt to a customer’s future needs.

Cisco also announced new enhancements to simplify SAN management and reduce operational cost. These updates include: End-to-end visibility into virtual servers, compute, network, SAN, and storage environments, which informs IT administrators of the differences in configuration between the Storage Array’s LUN masking database and the Storage Area Network’s zone database. The Automated Path Redundancy feature automatically analyzes, both every 24 hours and on demand, to proactively flag any issues.

Licensing-The following table describes optional licenses that can be purchased to enable additional features and capabilities on the Cisco MDS 9396S.