You are here: Home 2016 May Select the Great Cisco Aironet 1600 Series for Small Network/Offices

Small and midsized enterprises prefer to choose the 802.11n-based Aironet 1600 Series to modernize their network to handle today’s explosion of more clients, applications, and bandwidth demands. 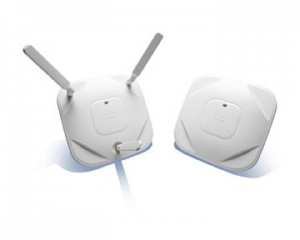 Why is the Cisco Aironet 1600 Series great for Small Network/Offices? There are some main points will let you know why.

Cisco Aironet 1600 Series, an enterprise-class, entry-level, 802.11n-based access point, was designed to address the wireless connectivity needs of small and medium-sized enterprise networks. It’s the best replacement for the Aironet 1140 and 1130 AP series (1140 and 1130 AP had been announced End of Life and End of Sale.)

The 1600 Series offers the advantage of 802.11n enterprise-class performance with 3×3 multiple-input, multiple-output (MIMO) technology with two spatial streams-ideal for small and midsized enterprises. 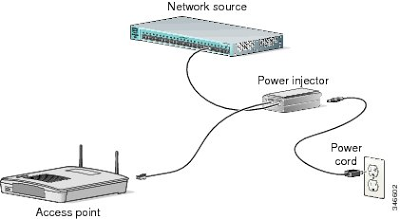 Have a Look–Features of Aironet 1600 Series AP

The Cisco Aironet 1600 Series is a component of the Cisco Unified Wireless Network, which can scale to up to 18,000 access points with full Layer 3 mobility across central or remote locations on the enterprise campus, in branch offices, and at remote sites. The Cisco Unified Wireless Network is the industry’s most flexible, resilient, and scalable architecture delivering secure access to mobility services and applications, and offering the lowest total cost of ownership and investment protection by integrating seamlessly with the existing wired network 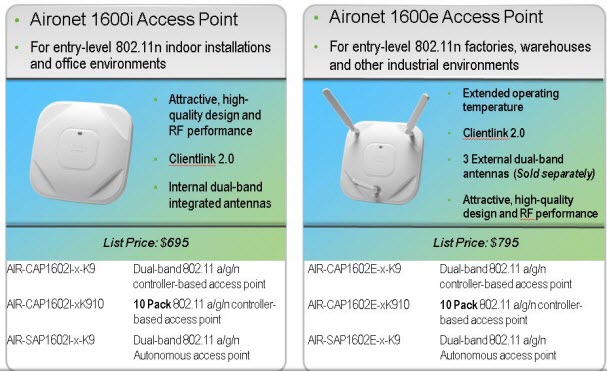 How to Install a Cisco Aironet Wireless Access Point

Pros: Simple and easy to setup for the average user if you are using other cisco equipment. Works well with layer 3 switch using dhcp If you purchase a poe layer 3 switch, you won’t need the additional power supply.     —Lawrence P.

Other Thoughts: My 1130ag died and I bought this as a replacement. The overall construction and design of the 1600 is better than the 1130 though the 1600 is uglier. The 1600 runs sooo much cooler than the 1130, plus it has rubber feet to properly sit on desks, the 1130 does not. The 1600 has a slight advantage on range as well but not by much. With all that said it’s taking a ding for the power cord. My 1130ag came w/ one years ago and I personally believe this should too. I ended up buying the new Cisco AC adapter for the power savings even though the old 1130 AC adapter works on this unit.          —Emile H.

Pros: Great Product. I installed it in my home. I now have Enterprise level reliability for my wireless connections. No more cheap WAPs that need reboots.

Cons: Slightly harder to configure. Can be done through the Web interface instead of CISCO IOS for most simple installations.

Other Thoughts: Make sure to use the easy setup wizard to initiate the configuration. Then finish the custom configurations in the SSID manager. Finally turn on the actual wireless controller so it can start servicing.             —Joseph K.

Pros: This is a device you come to expect from Cisco. Once you get it working, it works really well. The device itself is sturdy, and the included mounting bracket suits its job well. A separate power injector from Cisco worked just fine for getting power to the device.

Cons: The web interface is “meh”, but everyone’s been saying that for all Cisco products for years. There are some features you just can’t manage with the web interface. You’ll only get so far configuring it over HTTP. After that, it’s back to the good ol’ console. For example, turning off the LED status indicator. Not exactly something you want to see in a home.

Other Thoughts: This all depends on what your expectations are. If you are expecting something easy to configure and get working in a few minutes, this is not for you. If you are familiar with Cisco equipment and have managed them in the past, this device is relatively easy to manage.

Pros: Great coverage in our small office. Includes mounts for hard-points (screws into wall/ceiling) or for drop-ceilings. Quite slim and blends into the ceiling nicely.

Cons: EXPENSIVE-more than it really needs to be, even for a genuine Cisco product. Doesn’t come with a power supply (half-expected as it’s supported on any PoE switch). For a standalone access point, it doesn’t come with any instructions for configuration so you’d need to be fluent in Cisco’s IOS language (and have an appropriate Cisco console cable) or be familiar with the arcane Cisco web-based configuration tools (hosted on the device itself).

Other Thoughts: Like the other reviewer said – it mostly wants you to go through the setup “wizard” and adjust from there. It’s certainly not impossible to configure it from scratch but I’m not sure why you’d want to. Setting up WPA2 security is DEFINITELY more difficult than it needs to be.

We have ours mounted from a drop ceiling with excellent coverage about 50-75 feet away through various office walls. Only one device in our office (an iPhone) has some trouble at that distance. Everything else locks on with almost no difficulty.

We’re also using an inline PoE injector since the network it sits on doesn’t have a switch with PoE built-in. It’s nice to have just the one plug going to the unit. I’m tempted to run a second cat6 line to it for the serial console port, though, so I can access that directly from my desk.

If it didn’t work so well after the difficulties getting it set up with WPA2 and for the price, it wouldn’t get as good a rating from me as it does. But the fact that it does work so well mitigates much of the negatives.    —Todd L.