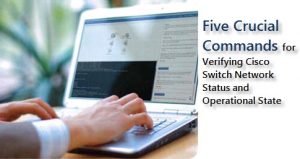 ow to use correctly to maintain your Cisco network? When your network consists of multiple devices connected at a distance, how can you test connections and keep on top of network performance? It’s easy but not simple task for Cisco users.

In this article Sean Wilkins (co-author of CCNA Routing and Switching 200-120 Network Simulator) discussed five basic commands you need to know and use correctly to maintain your Cisco network. For Cisco (and many other vendors), new commands are introduced at each progressive level of system verification. This article looks at five essential commands used to verify a network switch’s status and operation:

Available on almost all operating system platforms, including Cisco IOS, the ping command is used to verify the reachability of a targeted device. It does this by sending an Internet Control Message Protocol (ICMP) echo message to the target; if the target receives the message (and is not configured to drop it), it responds to the initial sender with an ICMP echo-reply message. In a perfect world, with no firewalls, and all devices configured to respond to these messages, the ping command would work perfectly. However, many devices (or devices en route, like firewalls) are purposely configured to ignore ICMP echo messages automatically, in order to hide their existence and avoid being targeted by attackers. In these cases, engineers must decide whether the unsuccessful ping is a real problem or a purposeful part of a network’s design.

TIP: As a general rule, don’t worry about devices that are outside your organization’s control.

Cisco IOS also has an extended version of the ping command that allows for more complex command configurations. For example, an engineer has the ability to control the source IP used (which makes sense when being run from a router configured with multiple IP addresses), the size of the messages being sent, and the content of the messages, among other options.

The traceroute command is typically used along with the ping command to further determine the reachability of a destination. traceroute works a bit differently from ping; instead of simply sending a message to the destination directly, it aims to find the path from the source to the target destination. It does this by using either ICMP echo messages on Windows or the User Datagram Protocol (UDP) probe messages on Linux and Cisco IOS. It figures out the path by taking advantage of the IP Time to Live (TTL) field.

It’s important to understand what the TTL field does. In normal circumstances, the TTL is used as a loop-prevention mechanism; it works by being set to a number which is then decremented at every respective IP “’hop.” If the TTL reaches a device and is decremented to 0, the packet is dropped and an ICMP “destination unreachable” message is sent back to the source device. When used by the traceroute command, the TTL finds each of the hops in the path between the source and the destination:

As with the ping command, many organizations block the ICMP echo messages and some of the UDP messages; and the output should be read with this fact in mind.

The traceroute command on Cisco IOS is extended in the same way as the ping command variant that allows for extended command configurations. The options offered by traceroutemirror most of the options available in an extended ping.

The telnet command has been around for a long time, allowing users to manage devices via a command-line interface. It’s very simple operation provides an unsecured Transmission Control Protocol (TCP) session between the source and destination. Characters entered on the source are immediately relayed to the destination, providing an experience on Cisco IOS (and Linux) that is the same as if the user were directly connected into the device locally.

CAUTION: A key term to take from this description is unsecured, the username and login information are sent between the source and destination in clear text.

The ssh (secure shell) command works similarly to the telnet command but creates a secure communications channel between source and destination. This means that the username and password are not sent in clear text and are protected (at least to some level) from anyone listening in on the conversation.

The show cdp neighbors command is used on a Cisco IOS device to view neighboring devices discovered by the Cisco Discovery Protocol (CDP). CDP is a Cisco proprietary protocol used for Layer 2 discovery; it has the ability to discover all other supporting CDP devices on a shared segment. (It doesn’t work across Layer 3 devices.) The following example shows some typical output of this command:

This article covers some of the most important basic commands you will need to know in order to verify status and current operational state of a network switch. You are likely to use these commands often. Engineers at every level must know these commands and be familiar with how they work.

The Original Article from https://www.ciscopress.com/articles/article.asp?p=2420613

How to Establish Communications between VLANs?