A New Compute Experience-Powered by HPE ProLiant Gen10: the world’s most secure Industry Standard Servers (Based on external firm conducting cyber security penetration testing of a range of server products from a range of manufacturers, May 2017.)

A new style of business demands an IT experience that is centered on business outcomes and provides consistent and predictable agility, security and economic control across hybrid IT.  Only Hewlett Packard Enterprise is uniquely able to deliver on this new IT experience not only because of the incredible innovation already brought to market such as composable infrastructure but now enhancing the whole experience with a new generation of capabilities powered by Gen10 that off­er customers the ability to accelerate applications and business insights.

The new Gen10 line of ProLiant servers has been introduced to audience since 2017. HPE ProLiant Gen10 was designed to meet three customers’ needs:

Gen10 Servers are key to infrastructure modernization, accelerating business insights across a hybrid world of traditional IT, public and private cloud.

In the following part, we’d like to share the main reviews and overview of the Gen10 that were discovered in HPE Discover in Las Vegas. 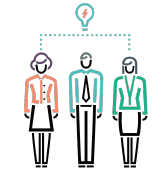 In a hybrid-cloud world that enterprises are either in or entering, these needs make total sense and pretty much nail it. While the classic enterprise infrastructure players are surely competition, HPE knows that it’s the public cloud that’s the real threat.

Peter Schrady (VP and GM SMB of Enterprise Server Solutions) elaborated, saying that some of the top things Hewlett Packard Enterprise had been hearing from its customers was that they wanted better ease and speed of deployment, a reduction in latency, and an increase in performance—all three of which together, comprise agility. He also mentioned customers’ desire for pay-as-you-go, flexible consumption models to compete with public cloud, and the ever-present need for better security to match today’s rapidly evolving threats.

Schrady then went on to enumerate some of the new Gen10 features that accomplish those customer needs and differentiate HPE from its competitors. He lauded HPE’s scalable persistent memory, up to 1.5 terabytes, and the fact that HPE is the only server OEM to have any persistent memory in its portfolio. He mentioned the new Intelligent System Tuning feature, saying that it will provide significant performance improvements, and touted HPE’s impressive storage flexibility (small-form factor, large-form factor, NVMe, etc.). Schrady went on to claim HPE boasts 58% more storage on average per server than its competitors.

Schrady was really going after it, calling out the competition. Once all the major OEMs release their Purley offerings, we’ll do the double-click on all these claims.

In the area of software-defined infrastructure, he lauded HPE’s ability to update servers at an unprecedented scale, and deploy as many as 10,000 servers in the span of minutes. Now that is impressive. He also said that HPE now has much more flexible, scalable firmware update capability, and a new, streamlined user interface.

The public cloud is more expensive at scale but compared to legacy IT, is much more flexible. This is where flex-capacity comes into play and an industry phenomenon I’m very excited about. Done, right, flex-capacity models remove a giant public cloud advantage.

Blocher handed the stage over to Alistair Winner, who heads up Hewlett Packard Enterprise ’s services unit and Pointnext, to talk in more detail about what HPE’s been doing to give customers the economic control they’ve been asking for. Winner prefaced by saying that his division has been working for the last 5 years to address the major challenge of trying to balance supply of IT with the demand of the business—many companies end up paying for services they don’t use. He ceded that one of the main benefits of the public cloud is the ability to better control your budget, while on-prem solutions tend to overprovision. Flexible Capacity, Winner said, is HPE’s answer to this problem, giving its customers “the best of both worlds.”  Blocher acknowledged that Flexible Capacity is great option for larger enterprise customers, but entreated Winner to talk more on HPE’s Capacity Care service—targeted towards smaller-to-mid-range customers. I haven’t yet done the due diligence to compare any of HPEs models to AWS, Azure, or GCP, but I will.

The Capacity Care service takes some of Flexible Capacity’s key components (active capacity management, for example), and provides a dashboard from which businesses monitor when exactly they need to add capacity. Winner said that another key goal of Capacity Services is to ease the procurement process for businesses—a major pain point, according to him. I’m very interested to see where Capacity Care service can go as I always saw flex-models as a big company phenomenon.

Blocher then moved on to the topic of security. I’ve already covered the topic of Hewlett Packard Enterprise and its new security measures in depth here, so I won’t spend too much time reiterating on that in this column. Blocher started with a handy infographic detailing HPE’s Secure Compute Lifecycle, which is comprised of 6 distinct steps: 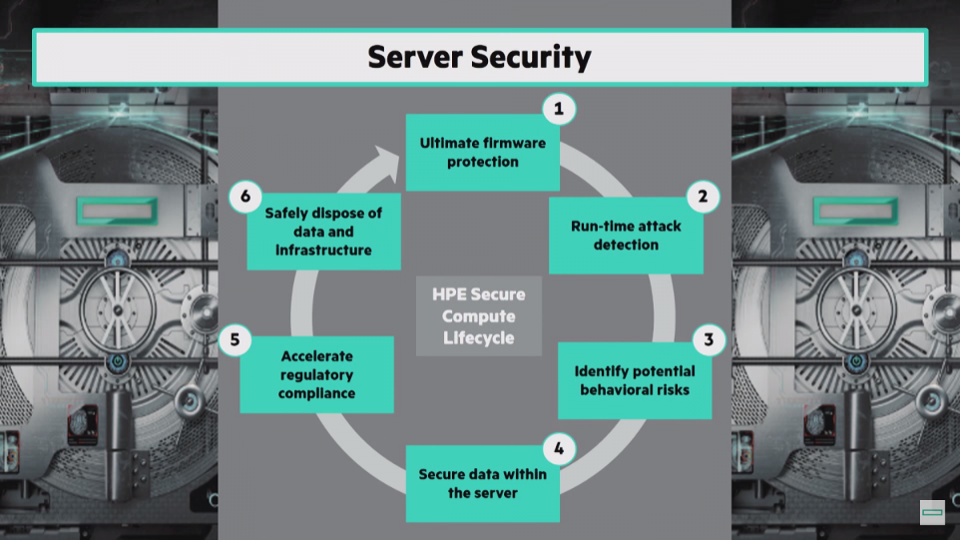 Schrady told the audience about HPE’s efforts to combat DoS (Denial of Service) and other new attacks— the silicon root of trust that HPE is now building into its hardware, the efforts the company has made to secure firmware, and the strict levels of encryption being put into place. As I mentioned, I’ve written in detail about these new features already, so this is just a cursory glance. Schrady concluded by stating that HPE differs from others in the industry, by providing “life-cycle security protection, from production in the factory, all the way through to end-of-life service.” While not every vendor has showed all their cards yet on Purley systems, from my view, HPE is currently doing the most in server security.

Schrady went on to discuss HPE’s major improvements in the realm of agility. He talked about OneView, HPE’s software-defined infrastructure management engine, and how Hewlett Packard Enterprise has managed to automate large amounts of deployments, provisioning, and management using industry standard APIs. Schrady also noted that HPE has expanded its ecosystem with new partners such as Mesosphere, and has integrated Mesosphere DC/OS into OneView, which brings new, scalable container provisioning and optimization capabilities to the engine. OneView has grown over the years from a monitoring program to a full-fledged software-defined management tool. Keep your eye on OneView as it’s one of those make or break pieces of software for HPE.

Over the next segment, Blocher brought several partners on stage— Intel’s Lisa Spelman (VP and GM of Intel Xeon Products and Data Center Marketing), VMware’s Richard Brunner (Chief Platform Architect, and VP of Server Platform Technologies), and Mesosphere’s Florian Liebert (co-founder, and CEO). Each of the guests elaborated on some of the specific ways their companies are partnering with HPE to deliver differentiated, innovate solutions in the areas of agility. These partner testimonials are standard fare for events like HPE, and sometimes more filler than actual substance—however, in my opinion, these particular guests were well placed, and helped bolster HPE’s overall thesis.

Yours truly hosts a security panel

I had the pleasure of moderating the last section of the breakout session, a discussion with James Morrison (Computer Scientist, Houston Cyber Task Force with the Federal Bureau of Investigations), and Jason Shropshire (Senior Vice President and CTO at cybersecurity firm InfusionPoints). Morrison talked about some of the new emerging threats (like ransomware), DoS, etc.), originating from a variety of bad actors—criminals, terrorists, and nation states. Shropshire explained InfusionPoints’ mission: to help its customers build, test, and defend its environments from cybersecurity threats. He complimented HPE’s silicon root of trust strategy, saying that it really sets a new bar and changes the game of cybersecurity. Again, I’ve already written in detail about a lot of these topics—namely, the emerging trends and changing landscape of cybercrime (which you can read about here). It was nice to get the chance to hash it out with some experts on the matter. It’s not every day you get to be on stage with the FBI and one of the top security audit and test companies like InfusionPoints.

Based on the Intel® Xeon® processor Scalable family

The most popular HPE ProLiant Rack Servers will meet your computing needs. Refer to the basic configurations for you. If you want to get prices and free quote for HPE Servers, you can visit here.