Is it hard to choose the storage for your laptops and computers? Most people may know the two storage components for the computers, but may not know which one is better. An SSD or a HDD, that’s a question. 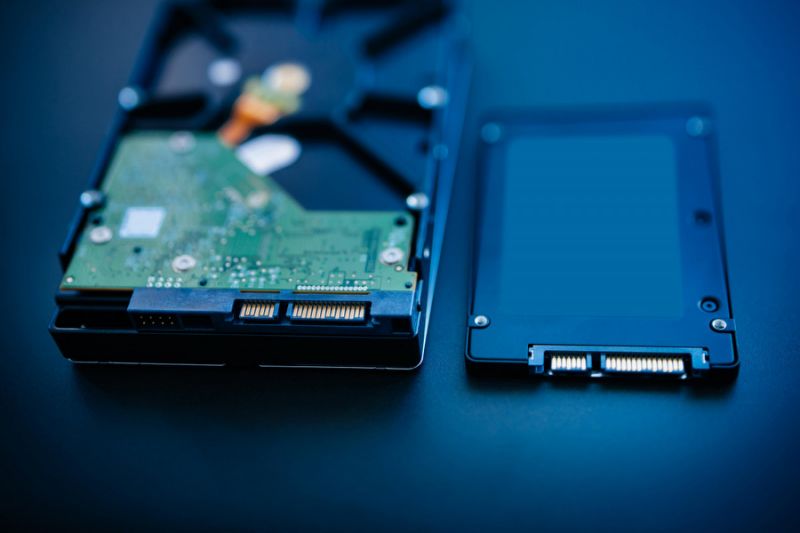 SSD stands for Solid State Drive. SSD can be thought of as an oversized and more sophisticated version of the humble USB memory stick. An SSD does functionally everything a hard drive does, but data is instead stored on interconnected flash memory chips that retain the data even when there’s no power present. The chips can either be permanently installed on the system’s motherboard (as on some small laptops and ultraportables), on a PCI Express (PCIe) card (in some high-end workstations and an increasing number of bleeding-edge consumer systems), or in a box that’s sized, shaped, and wired to slot in for a laptop or desktop’s hard drive (common on everything else). These flash memory chips are of a different type than is used in USB thumb drives, and are typically faster and more reliable. SSDs are consequently more expensive than USB thumb drives of the same capacities.

HDD, Hard Disk Drives, uses magnetism to store data on a rotating platter. A read/write head floats above the spinning platter reading and writing data. The faster the platter spins, the faster an HDD can perform. Typical laptop drives today spin at either 5400 RPM (Revolutions per Minute) or 7200RPM, though some server-based platters spin at up to 15,000 RPM!

Both SSDs and hard drives do the same job: They boot your system, and store your applications and personal files. But each type of storage has its own unique feature set. How do they differ, and why would you want to get one over the other?

As the price-per-gigabyte chasm between SSDs and HDDs continues to shrink (experts expect the gap will close between 2018 and 2020), more and more people are flocking to SSDs in a variety of uses. In 2014, SSDs powered 21% of all laptops; researchers forecast that number would double by 2017. Conversely, HDD implementation was expected to fall from 79% in 2014 to 59% in 2017.

With SSD pricing quickly becoming a non-issue, here are five other ways to compare HDDs and SSDs to see which option might be best for you.

When comparing the two storage drives, the speed at which data is written and read is the distinguishing factor between HDDs and SSDs. The former uses magnetism to store data on a rotating platter; the faster the platter spins determines how quickly information can be stored. SSDs, however, use flash memory and an embedded processor to store data.

SSDs provide noticeable performance upgrades, both for consumer-grade computers and web hosting servers. Many of our favorite hosts that operate all-SSD infrastructure, including InMotion, A2 Hosting, and DreamHost, say the configuration leads to page loads that are up to 20 times faster.

Because there are no moving parts, SSDs tend to be more durable and can better withstand the various bumps or jolts your computer experiences. The read/write process doesn’t degrade, and SSDs will maintain data integrity for more than 200 years.

With platters that spin at 7,200 rotations (or more) per minute, the mechanisms inside HDDs are not only subject to more wear and tear, but they are more susceptible to damage if dropped or bumped.

You know the saying, “speed kills.” While that may be a little exaggerated when it comes to storage devices, it does hold a grain of truth. SSD cells can wear out over time, slowly losing performance before dying. According to many, though, SSD users are far more likely to replace their storage drive because of obsoleteness than for suffering from a shorter lifespan.

As for HDDs, the argument is much the same with durability: Moving parts leave more room for things to fail. With only a few nanometers separating the platter and read/write head, any accidental contact can lead to data loss or complete failure.

This comparison can be illustrated pretty simply. Which takes more energy: running a marathon or tapping buttons on the remote while lying on the couch? HDDs need to spend extra electricity spinning up a stationary platter and moving the read/write head around, while the electricity SSDs use is solely devoted to storing data — no movement, friction, or extraneous noise.

For desktop computers and servers, SSDs equal lower energy bills. On laptops or tablets, users can typically squeeze out a few extra minutes or hours of battery life with SSDs.

Resource-intensive computer games provide an excellent test of pushing both storage devices to the limit. However, SSDs make very little difference in gameplay performance. Framerate issues won’t be solved by a storage device; those require an upgraded graphics processing unit, or GPU. Some gamers have reported that SSDs can reduce hitching, or the brief pauses when the games can’t pull assets from the hard drive fast enough to keep up with the player.

Overall, SSDs and HDDs are effectively the same when it comes to the action on the battlefield. The SSD benefits to gamers, however, are the same experienced by other PC users: faster boot times and quicker game loading.

How to Transfer: Migrate or Clone HDD to SSD

Web hosting customers looking to switch to an SSD will have a much easier time of things, as many hosting providers will migrate your websites and domains for free. If you’re feeling brave and feel like tackling the transition yourself, we’ve compiled some information to help you transfer your files and databases to a new host.

Free software, such as EaseUS Todo Backup, can help users upgrade their personal hardware to SSDs.

However, Windows and PC users often struggle with fitting the operating system and personal files onto a smaller-capacity drive when upgrading their desktop or laptop storage. Typically, the easiest way to move an existing Windows installation without reinstalling the operating system is by cloning the drive. With the storage restrictions, though, everything might not fit. Here are the steps to fix that:

Although balancing the two hard drives can be tricky at first, PC users will certainly benefit from the noticeably upgraded SSD performance and stability. By sharing the work and being properly maintained, both drives stand to last much longer.

As SSD prices drop and capacities increase, more and more hosts are incorporating the storage drives into their infrastructure. The mantras in web hosting are alliteratively amazing and accurate: Speed sells, performance is pivotal, and milliseconds matter. Google has begun penalizing slow sites in search rankings, and one in four visitors will give up on a site if it takes more than four seconds to load. 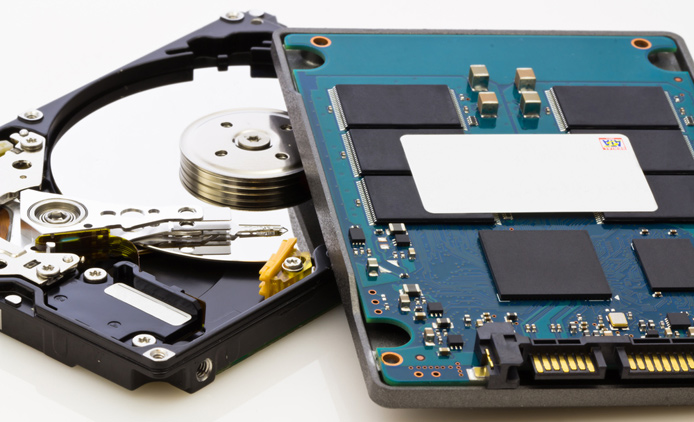 High-performance SSDs are available at all levels of hosting, but SSD plans do tend to be slightly more expensive and have stricter storage limits than hosting packages powered by HDDs. As with personal computing, however, the benefits are well worth the investment to most users and site owners.

SSDs gained initial hosting popularity in the more luxurious VPS and dedicated server realms, but we’d argue they make even more of an impact in shared hosting. Notoriously the most sluggish of the three services, shared hosting attracts the most customers.

Aside from first-time site owners who might not understand or even need faster performance, SSDs will provide a critical boost to mom-and-pop small businesses and individual developers looking to stand out from the crowd. Below, we’ve highlighted our favorite choice for SSD-powered shared hosting:

Once you get a taste of SSD hosting, you’ll probably never turn back. As your performance-minded site grows beyond shared hosting resources, you’ll find even more acceleration with a virtual private server, or VPS.

With managed services, cloud infrastructure, and full root access commonly included in the best SSD VPS plans, hosting providers enable customers to truly put the pedal to the metal. Our favorite host for SSD VPS hosting, displayed in the table below, excels in all phases of high-speed hosting.

Dedicated servers are already known as being the cream of the crop for handling high amounts of traffic and delivering optimal load-time performance. Plus, its status as the most expensive hosting server configuration probably indicates that the added cost of an SSD is not going to be an issue.

Hosting providers that offer the best dedicated server space will also likely include the ability to customize your configurations and infrastructure, along with speedy provisioning and support. Admittedly, it’s hard to go wrong with any dedicated server and SSD, but the host below stands above the rest for balancing price and power, and including services such as proactive monitoring, automatic backups, and multi-layer security solutions.

Best of Both Worlds? SSD and HDD Combo Hybrids

You’ll have to spend a lot of time reading the fine print to find a web hosting plan with both HDD and SSD storage, but they do exist — particularly at the VPS and dedicated server levels, which allow for much more flexibility when crafting your hosting architecture.

For personal computing, however, you don’t necessarily have to choose between storage capacity or speed. We’ve already shared how you can create your own hybrid desktop or laptop when upgrading your operating system to an SSD, but hardware vendors have begun manufacturing and selling combination drives, sometimes called SSHDs for solid-state hybrid drives, as individual components or as a feature on a full computer. With computer storage, hard disk drives and solid-state drives are a win-win situation — stronger together than apart.