Preface: The book “NX-OS and Cisco Nexus Switching: Next Generation Data Center Architectures, Second Edition,” is recommended for anyone looking 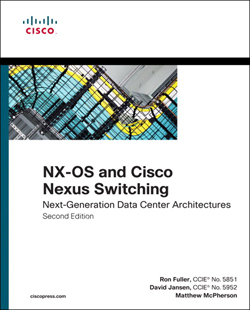 to purchase Nexus gear or currently supporting Nexus in their network environment.

This book covers practically every nerd-knob the Nexus platform has to offer and describes basic configurations of most of your typical setup tasks like VLANs, trunking, and routing protocols. For someone getting starting with Nexus, it’s found that these layer two and layer three configuration examples are so helpful introductions to configuring this switch.

The real heart of this book, however, are the chapters on configuring the new functions Nexus brings to the table, like virtual Port Channel (vPC) , Fabric Path, virtual device contexts (VDCs), Nexus 1000v integration, VXLAN, Overlay Transport Virtualization (OTV), and Locator ID Separation Protocol (LISP). While you would still be inclined to check the Cisco documentation for nitty-gritty details on the configuration of each of these technologies, this book is an excellent reference for what you need to understand and the command syntax you will use during deployment.

Pre-guide to READ THIS BOOK ‘NX-OS and Cisco Nexus Switching’:

First of all, we get to know the Icons Used in the book ‘NX-OS and Cisco Nexus Switching’ 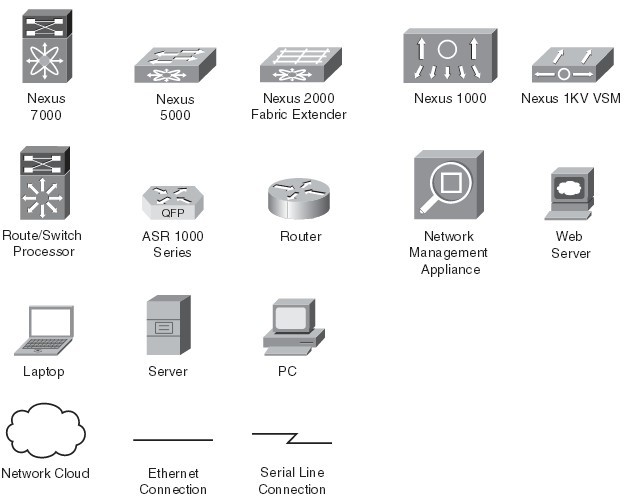 The Main Introduction of this ‘NX-OS and Cisco Nexus Switching’

The modern data center is rapidly changing and evolving to support the current and future demands of technology. At the center of this change is the network—the single entity that connects everything and touches all components of the data center. With that in mind, Cisco has launched a new series of switches, Nexus, based on a revolutionary new operating system, NX-OS, to meet these changes and provide a platform with the scalability, reliability, and comprehensive feature set required in the next generation data center.

The purpose of this book is to provide a guide for the network administrator who might not be familiar with Nexus and NX-OS. It is intended to be used as a “go-to” resource for concise information on the most commonly used aspects of NX-OS across the Nexus 7000, 5000, and 1000V platforms.

The goal of this book is to provide best practice configurations to common internetworking scenarios involving Nexus products. Having been network administrators ourselves, we are conscious of the pressures and challenges with finding accurate and relevant information, especially on new technology. We intend this book to be a resource the network administrator reaches for first.

Although there might be more than one way to accomplish a networking requirement, we focused on the best way that minimizes operational complexity and maximizes supportability. We realize and respect that there might be corner-case scenarios that call for configurations not described in this book but sincerely hope we address the vast majority of common configurations.

Who Should Read This Book?

This book is targeted for the network administrator, consultant, or student looking for assistance with NX-OS configuration. It covers the three major Cisco Nexus products and high-lights key features of them in a way that makes it easy for the reader to digest and implement.

How This Book Is Organized?

This book has been organized following the OSI system model for the initial chapters starting with Layer 2 and then moving to Layer 3. We then add in network-based services such as IP multicast, security, and high availability. Next the embedded serviceability features of NX-OS are explored before moving to emerging data center architecture, Unified Fabrics. Last, and certainly not least, we focus on Nexus 1000V and its capability to provide insight, consistent network policy, and simplified administration to virtualized environments.

Chapters 1 through 9 cover the following topics:

■ Chapter 2, “Layer 2 Support and Configurations”: Focuses on the comprehensive suite of Layer 2 technologies supported by NX-OS including vPC and Spanning Tree Protocol.

■ Chapter 3, “Layer 3 Support and Configurations”: Delves into the three most common network Layer 3 protocols including EIGRP, OSPF, and BGP. Additionally HSRP, GLBP, and VRRP are discussed.

■ Chapter 5, “Security”: Focuses on the rich set of security protocols available in NX-OS including CTS, ACLs, CoPP, DAI, and more.

■ Chapter 7, “Embedded Serviceability Features”: Provides the reader with the ability to leverage the embedded serviceability components in NX-OS including SPAN, configuration checkpoints and rollback, packet analysis, and Smart Call Home.

■ Chapter 8, “Unified Fabric”: Explores the industry leading capability for Nexus switches to unify storage and Ethernet fabrics with a focus on FCoE, NPV, and NPIV.

The Full READING and download of this book you can visit the PDF File of this book: https://www.worlduc.com/UploadFiles/BlogFile/36%5C1126410%5C1.pdf

How to Configure EIGRP on a Cisco Router?