To meet today’s needs of protecting environment, every field advocates producing the “green” products. So does in the IT field. As a customer, we wanna buy less equipment, use less power. Luckily, Cisco always does well in IT world.  And in this article we will take the popular Cisco 3750-X as an example to illustrate the green product.

The Catalyst 3750-X stackable switch supports StackPower, which allows the power supplies to share the load across multiple systems in a stack. By connecting the switches with power stack cables, you can manage the power supplies of up to four stack members as a one large power supply that provides power to all switches and to the powered devices connected to switch ports. Since power supplies are most effective when running at 30 to 90% of their maximum load, taking some of the power supplies offline provides maximum power efficiency. Switches in a power stack must be members of the same switch (data) stack. StackPower can cut both capital and operational costs.

The 3750-X offers other new features, such as MACSec encryption and Smart Operations deployment software, on top of what is already a lengthy features list. But here we focused on the switch’s power management capabilities.

StackPower offers a means of pooling power supplies within a stack and making wattage available to any switch as needed. The advantages include savings on power and power supplies; redundancy with no extra footprint; and a prioritization scheme that first cuts power to lower-priority ports in case a power supply fails.

Catalyst 3750 switches, with multiple switches connected in a ring topology. The switches continue to share power if a connection fails, something we verified in testing. (While StackPower works only with the new X series switches, StackWise Plus works between newer and older Catalyst 3750 models.)

Up to four Catalyst 3750-X switches can form a StackPower ring. This is fewer than the nine switches supported in StackWise Plus. However, a nine-switch StackPower unit still can be formed through the use of an XPS-2200, an external redundant power system that connects to the switches using a star topology. We did not test the XPS-2200.

Cost savings is StackPower’s most obvious benefit. Given the importance network managers typically place on high availability, it’s not uncommon to find redundant power supplies in every switch throughout the enterprise. With StackPower, it’s possible to purchase fewer power supplies and still obtain N+1 redundancy for power supplies in a ring.

For example, if each of three switches in a stack consumes 200 watts, the aggregate power draw is 600 watts. With 715-watt power supplies, full N+1 redundancy would involve six power supplies at $1,000 each, supplying up to 4,290 watts.

In contrast, the StackPower could run the same stack with as few as two 715-watt power supplies.

That’s a savings of four power supplies, or $4,000, and a rated capacity of only 1,430 watts, with the same level of redundancy.

While many other stackable switches support an external redundant power supply, this is the first system we’re aware of that provides internal redundancy, and thus requires no extra rack space.

The new power system also boosts resiliency through strict and redundant configuration modes that allocate and reserve only as much power as is required. If one or more power supplies fail, the switch will begin shedding power using a three tier prioritization scheme. This prioritization could be used, for example, to protect PoE ports by first shutting down other ports.

Another new feature is support for the new PoE+ standard. As described in the IEEE 802.3at specification, PoE+ offers up to 30 watts per switch port, nearly double the 15.4 watts supplied by first-generation PoE equipment.

As far as we could determine, the Catalyst 3750-X is among the first switches to concurrently support PoE+ on all 48 ports without requiring an external power supply.

Here we have a clear choice test of Cisco Catalyst 3750-X: how did Cisco deliver cost savings by creating power pool within switch stack? And we put that claim to the test using the PowerSync analyzer from Sifos Technologies. (Sifos provides PoE and Ethernet PHY automated test and measurement solutions for network equipment and semiconductor manufacturers, test labs, system integrators, field service and IT departments.)

Using the Sifos analyzers, we assessed PoE+ in two ways. First, we verified that the 3750-X could indeed supply 30 watts on all 48 gigabit Ethernet ports at the same time. The switch passed this test without complaint.

Second, we ran the full Sifos protocol conformance suite to measure how faithfully the new Cisco switch adheres to the IEEE 802.3at spec. Of hundreds of tests in this suite, the 3750-X failed just three, all relatively minor. Cisco says it’s issuing a fix for these issues in new software scheduled for release in late August.

The first failure involved one field in the logical link discovery protocol (LLDP) packets that devices used to identify one another. This is a gray area in the 802.3at specification and might not be a problem in production networks.

Cisco uses a legacy value in the power-via-MDI (medium dependent interface) type-length-value field of LLDP packets rather than one of two values given by the IEEE standard. This has no impact on Cisco’s PoE+ devices. It could be a problem for other vendors’ powered devices—but only if those devices expect a specific return value. Even in that case, the device could still use PoE+ but might not support some extended features.

The second failure involved the time needed to go into a fully powered-up state. The IEEE spec expects power-supplying equipment to take no longer than 400 millisec between the instant of deciding to apply power and being fully powered up. The Cisco switch took slightly longer, as high as 465 millisec, on a few switch ports. Other ports were within the 400-millisec limit.

The higher times are probably due to Cisco’s use of IOS to handle power-management decisions as opposed to the PoE+ logic itself in dedicated power injectors. The 400-millisec limit is in place to minimize the risk of a device being unplugged during power-up and has no impact on interoperability.

The final failure had to do with the way the switch restricts current as it powers up. This is mostly to protect the switch in case a powered device demands too much current. The IEEE spec requires the switch to go into a current-limited state for at least 50 millisec but no longer than 75 millisec. The Sifos analyzer reported that a few Cisco switch ports remained in a current-limited state for at least 100 millisec. This issue is unlikely to have any impact on device interoperability. (Further, our power consumption measurements suggest the switch has sufficient power to handle overload situations.)

Above and beyond these minor issues, network managers may need to reconsider power and cooling budgets when rolling out PoE+.

A large-scale 802.3at deployment requires a lot of power—in this test, 1,440 watts just for PoE+ alone on 48 ports, with additional wattage needed for other switch functions. With all that power in use, PoE+ installations also throw off far more heat than their PoE predecessors. Older wiring closets with poor ventilation unfortunately are all too common in enterprise networks; these aren’t good candidates for supporting many ports of PoE+.

As a final test of the Catalyst 3750-X’s power management features, we measured power consumption in various configurations, both idle and fully loaded.

We used three tools for this: a Fluke 335 TrueRMS clamp meter for the power measurement itself; the Sifos analyzer to load up PoE+ ports; and a Spirent TestCenter traffic generator/analyzer to blast the switch with line-rate traffic on all ports, thus fully utilizing the switch fabric.

The StackPower feature of the Cisco Catalyst 3750-X pools power among stacked switches, reducing power consumption and the number of power supplies needed.

The StackPower switches at right offer the same N+1 redundancy as the left-hand switches without StackPower, yet require four fewer power supplies to do so. 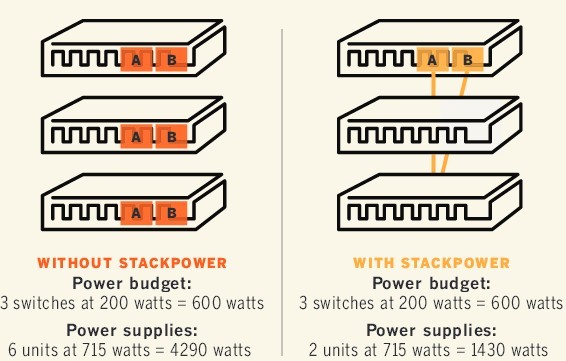 With a single 1,150-watt power supply, one switch consumed around 141 watts idle and 150 watts fully loaded (see the picture of Cisco catalyst 3750-X power consumption). These figures are virtually identical to those measured on a Cisco Catalyst 3570-E in Network World’s early 2008 access switch comparison.

Power consumption was only about 50% higher, not double, when the same single power supply drove two 3750-X switches in a stack. And with PoE+ enabled and line rate traffic offered to 48 giga-bit Ethernet ports, a two-switch stack equipped with two power supplies consumed about 1,800 watts (the slight differences with and without traffic are within the Fluke instrument’s measurement resolution). As noted, PoE+ alone consumes 1,440 watts of the total. The two switches use the remaining 364 watts, or around 182 watts each, comfortably within Cisco’s rated maximum of 246 watts per switch.

StackPower and PoE+ provide an innovative way to pool power and to support power-hungry new devices.