As one of the Cisco Nexus 9500 modular switches, the 8-slot Nexus 9508 switch is the first available platform in the family that will be followed by the 4-slot and 16-slot platforms.

In addition to the high cooling efficiency, the Cisco Nexus 9500 Series also leads with high power efficiency. Its power supplies are certified for the industry highest efficiency standard, 80 Plus Platinum, with 90-94 percent power efficiency across all workloads.

Under the supervisor modules are eight power supply slots capable of supplying 3000 watts of AC power each; however, only two are needed to power a fully populated chassis. An additional two power supplies can be used for redundancy in a 2-plus-1 or 2-plus-2 configuration. The remaining four slots provide power headroom for later migration to support 100 Gbps and another generation of application-specific integrated circuits (ASICs).

Line cards and fabric modules of the Cisco Nexus 9500 Series are designed with minimal number of ASICs, a mix of 28-nanometer Cisco and 40-nanometer Broadcom custom and merchant ASICs, respectively that reduces the number of heat pockets on a module.

The combined result of all these innovations is extremely low power consumption per port.

Each network forwarding engine is built with 32 40-Gbps links and a core switching capacity of 1.44 billion packets per second for even the smallest packet of 64 bytes. 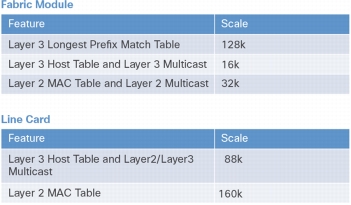 A Cisco Nexus 9508 Switch can have up to six fabric modules that all function in active mode.

There are two network forwarding engines on this line card. One supports the 48 1-Gbps or 10-Gbps front-panel ports and the other supports the 4 40-Gbps ports.

Because of the port speed flexibility, the front-panel ports can be operating at different speeds. Speed mismatch is one of the top reasons for port congestion and packet buffering. To accommodate this additional need for buffer, the line card is built with two extended processors, each offering an additional 40 MB packet buffer space while operating in a pass-through mode along the data path between a network forwarding engine and fabric modules. Transit traffic between front-panel ports and fabric modules, as well as locally switched traffic from a 10-Gbps port to a 1-Gbps port, can take advantage of the extended buffer space.

This section illustrates the power consumption of the Cisco Nexus 9508 system with different configurations and under different types of loads.

A typical configuration may consist of the following components:

A fully loaded configuration consists of the following components:

At a 100 percent line rate, the power consumption for such a system goes to 5470 watts in the worst-case scenario of 64-byte packets and to 4746 watts for traffic with a mix of packet sizes.

The midplane-free chassis design enables cooling efficiency. The combination of merchant and custom silicon allows the line cards to have few ASICs while providing record-setting performance, resulting in the lowest number of heat sinks in the system. With these innovations, the front-to-rear airflow, and its 80 Plus Platinum certified highly efficient power supplies, the Cisco Nexus 9500 Series Switches set a record for energy efficiency for data center – class switches.

The Cisco Nexus 9508 Switch provides high-density 40 Gigabit Ethernet in the data center with the best possible power consumption and latency figures even with a fully loaded system under stress, as demonstrated by the RFC test results.