Those two data center switches are the industry’s first native 25Gbps-capable switches, delivering 25/50/100Gbps speeds at the cost of 10/40Gbps.

“The Cisco Nexus 9200 is a next-generation Top of Rack switch that pushes the boundaries and exceeds performance of existing solutions,” said Trey Layton, Senior Vice President and Chief Technology Officer, VCE, the Converged Platforms Division of EMC. “These switches meet the needs for the dense, hyperconverged compute and IO intensive applications that VCE VxRack Systems address. For example, it’s not uncommon for customers with hundreds or thousands of VxRack nodes to drive millions of IOPS, as well as hundreds of gigabits per second of system bandwidth. The Cisco Nexus 9200 solves this problem.”

Using the widely deployed industry-leading Cisco NX-OS Software operating system, the Nexus 9200 switch is designed for the programmable fabric, which offers flexibility, mobility and scale for service providers and IaaS/cloud providers; and for the programmable network which automates configuration and management for customers who want to take advantage of the DevOps type of operation model and toolsets.

The Cisco Nexus 92160YC-X Switch is a 1-rack-unit (1RU) switch that supports 3.2 terabits per second (Tbps) of bandwidth and over 2.5 billion packets per second (bpps). The 48-port downlink ports on the 92160YC-X can be configured to work as either 1/10/25- Gbps ports, offering deployment flexibility and investment protection. The uplink can support up to four 100-Gbps OR up to six 40-Gbps ports, or a combination of 10-, 25-, 40- and 100-Gbps connectivity, offering flexible migration options.

The Cisco Nexus 92160YC-X Switch empowers customers by giving them a better understanding of their network flow and telemetry.

**Typical and maximum power values are based on input drawn from the power circuit. The power supply value (for example, 650W AC power supply: NXA-PAC-650W-PI) is based on the output rating to the inside of the switch.

The software packaging for the Cisco Nexus 9000 Series offers flexibility and a comprehensive feature set while being consistent with Cisco Nexus access switches. The default system software has a comprehensive Layer 2 security and management feature set. To enable additional functions including Layer 3 IP unicast and IP multicast routing and Cisco Nexus Data Broker, you must install additional licenses. Table 3 lists the software packaging and licensing available to enable advanced features.

For a complete list of supported features, refer to Cisco Feature Navigator.

More detailed information about the Cisco Nexus 9200 Platform Switches, such as the Performance and Scalability Specifications*, Ordering Information, more Features and Benefits you can refer to https://www.cisco.com/c/en/us/products/collateral/switches/nexus-9000-series-switches/datasheet-c78-735989.html

More Compare Models to Help You Know the Nexus 9200 Well 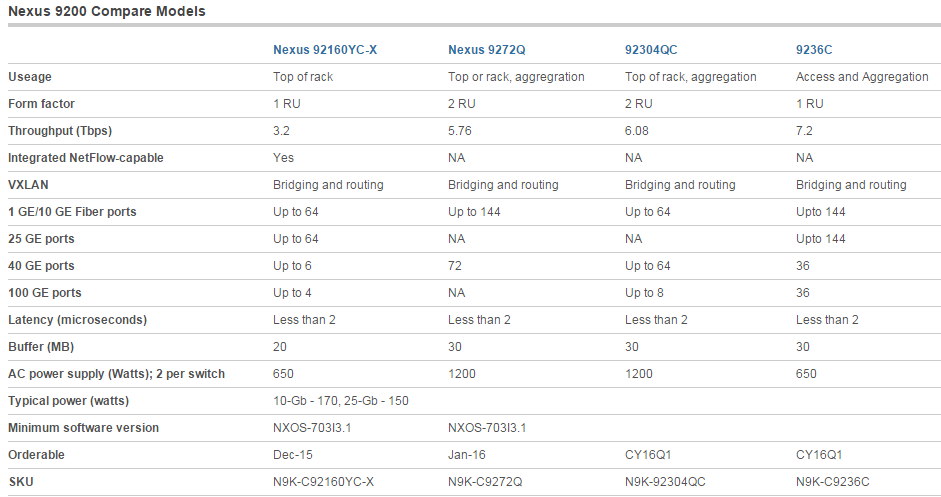