The new switching platforms provide the scale, telemetry, security, and performance needed for distributed containers and microservices, as well as the lossless traffic needed for IP storage and hyperconverged infrastructure. The new switches give Cisco customers a two-year innovation advantage over competitive technology.

In data center switching, Cisco rolled out the new Nexus 9200, a system based on Cisco ASIC technology that enables customers to transition from 10/40G Ethernet switching to 10/25/40/50/100G at the price of 10/40G. Cisco says this is possible due to the use of 16nm technology that enables 36 ports of line rate 100G on a single chip, and scales from 100Mbps to 100G on the same port. 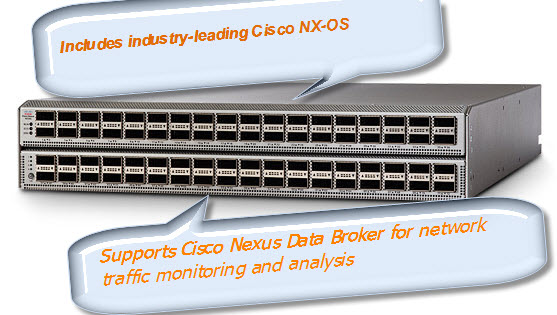 The switches, which are targeted at multiple, large-scale cloud networks needing hyperconverged fabrics, are also designed to provide pervasive visibility into flow tables at both the leaf and spine; 140K micro segments per rack for security, and support for over a million containers per rack; and adaptive capacity and congestion control for dynamic load balancing and lossless operation.

The Nexus 9200 and 9300EX are fixed configuration top-of-rack switches that can both run in standalone NX-OS mode, while the 9300EX can also run in ACI fabric mode. Cisco also rolled out a line card for the modular Nexus 9500 chassis that supports 32 40/100G ports using the new custom ASIC, and can run in either NX-OS or ACI mode.

The Cisco Nexus 9300 platform offers a compact and powerful set of switches that can be used at the top of the rack, in the middle of the row, and at the end of the row in both traditional three-tier and spine-and-leaf architectures. The platform includes fixed-configuration 1-rack-unit (1RU), 2RU, and 3RU access switches and the Cisco Nexus 9336PQ ACI Spine Switch; offering flexible 1/10/25/40/50/100-Gbps connectivity options and nonblocking functionality.

APIC on Nexus 7000 and ASR 9000 will be available in the third quarter. Nexus Fabric Manager and the enhanced NX-OS are shipping now.