You are here: Home 2012 November Types of VLANs

“Hello, i am getting difficulty in the types of VLAN?? Please explain the following: How many types of VLAN are existing? Explain each type? Types of traffic VLAN can carry?”

There are different types of VLANs. The type of network traffic they carry defines a particular type of VLAN and others derive their names due to the type or a specific function the VLAN performs. The following describes common VLAN:

VLAN 1 has all the features of any VLAN, except that you cannot rename it and you cannot delete it. Layer 2 control traffic, such as CDP and spanning tree protocol traffic, will always be associated with VLAN 1 – this cannot be changed. In the figure, VLAN 1 traffic is forwarded over the VLAN trunks connecting the S1, S2, and S3 switches. It is a security best practice to change the default VLAN to a VLAN other than VLAN 1; this entails configuring all the ports on the switch to be associated with a default VLAN other than VLAN 1. VLAN trunks support the transmission of traffic from more than one VLAN. Although VLAN trunks are mentioned throughout this section, they are explained in the next section on VLAN trunking. 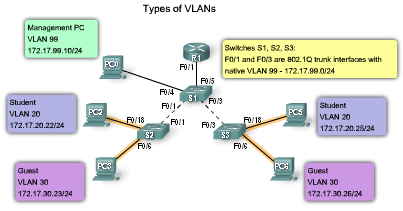 A data VLAN is a VLAN that is configured to carry only user-generated traffic. A VLAN could carry voice-based traffic or traffic used to manage the switch, but this traffic would not be part of a data VLAN. It is common practice to separate voice and management traffic from data traffic. The importance of separating user data from switch management control data and voice traffic is highlighted by the use of a special term used to identify VLANs that only carry user data – a “data VLAN”. A data VLAN is sometimes referred to as a user VLAN. 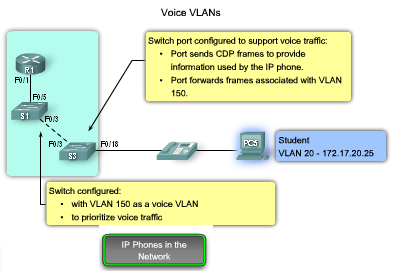 Voice VLAN is configured to carry voice traffic. Voice VLANs are mostly given transmission priority over other types of network traffic. Communication over the network is not complete without phone calls. More calls are made over the network than other forms of s message transmission. Sending emails and text messages are also forms of inter-relations but listening to a real voice provides legitimacy and assurance.

It is considered among network administrators to design a network that supports VoIP with an assured bandwidth to ensure voice quality, and capability to be routed around congested areas on the network with minimal delays (150-180 milliseconds).

How to Configure Private VLANs on Cisco 3560 Switches?