You are here: Home 2013 July Cisco is Building an Internet of Everything Router

Cisco CEO Chambers says new ASIC disclosed at Cisco Live will be routing tech for ambitious initiative; and Insieme may include storage. 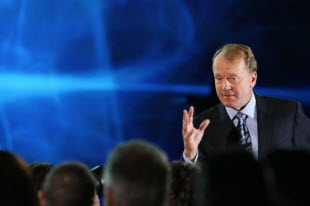 Cisco is building a router for the Internet of Everything, the company’s initiative to connect the billions of devices–or 99% of the world–that it claims aren’t already connected.

As disclosed at Cisco Live three weeks ago, Cisco’s developing a new high-end routing ASIC that will contain 4 billion transistors, 1.5 million lines of software code, and cost $250 million. The ASIC will “generate the routing technology for the Internet of Everything,” Cisco CEO John Chambers said during an exclusive interview with Network World this week.

“Our next high-end ASICs will generate the routing technology for the Internet of Everything,” Chambers said during the interview, the transcript of which will be posted later. “(It’s) half software, half hardware.”

The chip is expected before the end of the year. The platform on which it will run is unknown, but is believed to be a CRS router.

Chambers also intimated that Cisco’s Insieme spin-in is developing a product that converges switching/routing, storage and compute on a common platform, and that the Insieme architecture will spread beyond the data center to the edge of the network, including access routers.

When asked to elaborate on comments Cisco COO Gary Moore made at Cisco Live three weeks ago about routers and storage and compute converging, Chambers said:

“It looks like Insieme … and you’ve got to put in switching. If you think about it, the ability to also apply storage, whether it’s from our partners or from ourselves. It’s a single architecture first in the data center and then throughout the whole network. The ability to go all the way to the edge of the network, whether a top of pole router or any access router from Cisco. We’ll add UCS technology to every device.”

The Insieme product line is expected to debut later this year as well.

Chambers also addressed the multiple platforms Cisco is now offering for the data center–Catalyst, Nexus and soon Insieme–and the apparent overlap and inconsistencies, and perhaps confusion, they present. He said it takes “courage” to disrupt the market: “Any time you offer multiple approaches to a market, you’ve got to spend a lot of time with your customers understanding the plusses and minuses for each way you pursue them,” he said. “What Cisco has always done is handle this transition pretty smoothly. The results speak for themselves in our ability to do this. If you manage this right, you protect your installed base, you allow people to continue down (their current) path. Then as you bring out products that skip a generation, you’ve got to have the courage to disrupt the market. And then you have to bring those two together as the best of both worlds. Think of it not as a router, or as a switch, or a server, or SDN; think of it as the architecture for the data center. We’re probably two to three years ahead of any competitor at being able to do this because the people who think you can get this from an Intel chip or a chip from Broadcom just don’t get it.

“I’m sure we will have some critics on this, and our competitors will throw as much fear, uncertainty and doubt as possible at it, but this looks really solid. It will be an architectural play. It will be like no one else can do. The CIO has to get architectural control to produce the business results.”

Chambers also addressed Cisco’s opportunity and challenges with SDN, Network Functions Virtualization (NFV) and merchant silicon, which is gaining momentum among  cloud providers looking to shave capital and operational costs by adopting off-the-shelf hardware that can be managed by open source software. Enterprises are expected to adopt more cloud services and Infrastructure-as-a-service offerings to augment or replace their on-premises networks.

“SDN does one thing for you; NFV is another set of functionality; and clearly cloud does another,” Chambers said. “We’re going to combine them altogether as an architecture.

“Nobody wants SDN, NFV or even cloud,” he said. “What they want is how quickly I can increase revenue, bring up new services, gain competitive advantage through innovation. SDN is one of 15 equations as you make this transition to faster revenue generation.”

In communicating Cisco’s position, he made no bones about the company’s intention to turn merchant silicon-based SDNs into a custom hardware play even though Cisco/Insieme plans to go with a hybrid approach..

“You can’t design into the ASICs of a classic server the networking capability, what we’ve done for 20 years,” Chambers said. “True router technology is 36 million lines of code. To think you’re going to take 36 million lines of code and overlay something like SDN–very complex software–to solve the problem of very complex software without ASICs or architecture combining it, probably is insanity.”

“SDN is one element” of application-centric networks, Insieme’s programmable networking and IT pitch, he said. “We played defense on SDN for years instead of just embracing it.”

This article is written by Jim Duffy (who has been covering technology for over 25 years). Original from https://www.networkworld.com/news/

12 Big Proposals for SDN IT Buyers

Cisco vs. Juniper: How Different are Their SDN Strategies?