One thing that is often confusing to any network engineer (regardless of level) is the version and naming structure used by Cisco for their IOS images. Although the naming used for some of the newer devices is changing to a simpler structure, it will be a while before all the different versions are consolidated. This article covers these different releases and aims to give a single location where network engineers can look to figure out what the different releases mean. Although this is not an exhaustive list of every Cisco version, it does cover the most commonly used versions.

One term that is often used is the IOS release type. With versions of IOS earlier than 15, a specific image could be considered one of the following four different release types:

Limited Deployment (LD): These releases do not include any new features or platform support but do include bug fixes. LD releases are between an ED release and a GD release.

General Deployment (GD): These releases can be used anywhere in a customer network with the same feature and functionality requirements. These tend to be stable on almost all platforms.

With IOS 15 and later, both the LD and GD deployments will be retired. New releases will be considered either ED or MD. The IOS train paths have also been consolidated. With earlier versions of IOS, the different ED (T trains; for instance, 12.4T) and MD (not T trains; for instance, 12.4) has different code bases. With IOS 15 and later, the code bases will be consolidated. MD releases (called M releases, or extended release) will be released and have a 44-month support window, whereas ED (T releases, or standard release) will have a 18-month support window.

A number of different versions exist within each release of IOS. This article takes a look at a few of these and how what they are used for.

With IOS Version 12, many different sub-versions of IOS exist, including specialized support for specific platforms; the next few sections cover a couple of the most common.

IOS Version 12 has a few different ways to notate version, including those shown in Figure1. 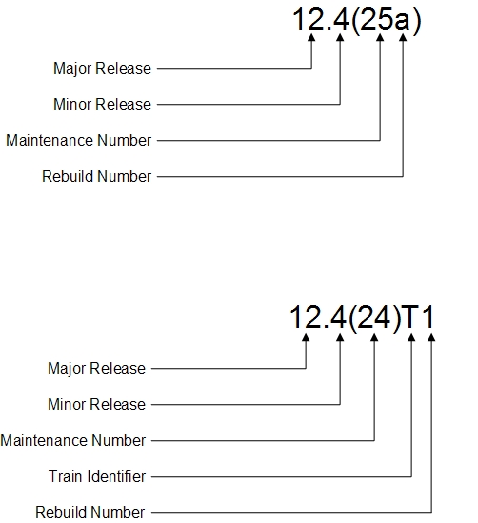 The 12 base versions are also referred to as the mainline release of a version. These releases tend to be the most stable and include support for most of the available platforms. Other more specialized versions of IOS are rolled into the mainline as an update when they have been sufficiently tested. (They go through the release process shown in the previous section.)

The T train is used to add the newest features and platforms. After the software has been tested thoroughly, it is rolled into the mainline release. 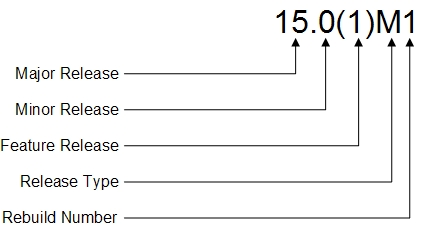 As with IOS version 12, IOS Version 15M provides a mainline release and is also referred to as a maintenance release.

As with IOS version 12T, version 15T is focused on new features and platforms and is supported for a shorter amount of time than the maintenance releases. After 15T releases have been tested thoroughly, they are wrapped into the next 15M release.

The way that Cisco has named their IOS packages has changed over time. With IOS Version 12.3 through 15, this has remained relatively constant. Figure 3 shows the eight different packages that are available. 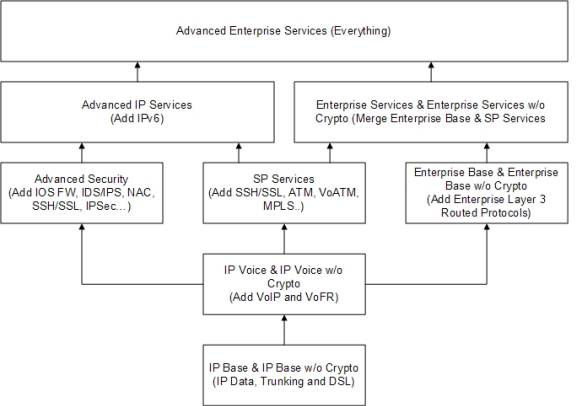 Of course, this can get confusing. In an effort to make the software licensing process simpler and provide operational savings, the way that packages are created has changed with the new Integrated Service Routers (ISR) Generation 2. With these devices, a universal image is shipped on each one. The functionality provided by the image is dictated by the features enabled with a license key.

Each of these is then able to be added together to obtain the features required in each situation (for example, UC + Security or Data + Security).

Well, leave it up to development to have a structure that makes sense to only a small number of people. This certainly seems to have happened with the various iterations of IOS. This article should enable current and new network engineers to break down what every image provides so that future IOS version selection becomes easier. Let’s hope that going forward the model being used for the newer ISR G2 will be used. At the very least, this will make the selection of the most appropriate IOS image feature package possible without considerable time spend with Cisco presales.

onePK: Your Network, Your Way

onePK is a key element within Cisco’s announced Open Network Environment SDN strategy. onePK is an easy-to-use toolkit for development, automation, rapid service creation and more. It enables you to access the valuable data inside your network via easy-to-use APIs.

Build or extend applications across your routers and switches, to servers and new business platforms. Automate current services or create new ones on demand, when and where you need them and faster than ever. onePK makes your network more powerful and flexible while giving you the control you need.

Our early adopters are using onePK for new applications, service automation, and more.

Cisco IOS XR Software, a member of the Cisco IOS family, is a unique self-healing and self-defending operating system designed for always on operation while scaling system capacity up to 92Tbps. Cisco IOS XR powers the Cisco Carrier Routing System, enabling the foundation for network and service convergence today while providing investment protection for decades to come.

Cisco IOS helps establish a transition to next generation platforms. It gives you the tools to navigate the dynamics of the ever-changing business models that are transforming Internet and intranet use today.

Cisco IOS continues to evolve, and offer new benefits to help you manage your network. More info you can visit:

All Cisco IOS and NX-OS Software you can refer to https://www.cisco.com/en/US/products/sw/iosswrel/products_ios_cisco_ios_software_category_home.html#~Software,

Port Forwarding a Range of Ports on Cisco IOS