In this article we will take a look at two enterprise-level access points. They’re a part of the so-called “Wave 1” phase of the 802.11ac standard: both access points support up to three spatial streams and 80 MHz wide channels, offering theoretical data rates up to 1.3Gbps. 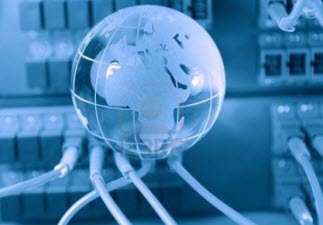 We found maximum throughput speeds in the range of 360M to 380Mbps range, similar to the rates found in the 802.11ac routers we tested earlier this year.

Cisco sent its Aironet 3602I Access Point loaded with their 802.11ac module. Although the access point supports the standard Control and Provisioning of Wireless Access Points Protocol (CAPWAP), we used their Cisco 2504 Wireless LAN Controller for the testing.

The access point comes with two integrated 2.4GHz/5GHz dual-band radios. The 802.11ac module that attaches to the bottom of the access point adds a 5-GHz radio supporting three spatial streams. The access point supports broadcasting up to 16 SSIDs. There’s a 2dBi gain internal omnidirectional antenna for 2.4 GHz and 5 dBi gain internal omnidirectional antennas for 5Ghz. The maximum transmit power for both integrated dual-band radios is 23 dBm and 22 dBm for the 802.11ac module.

The access point setup and configuration process was fairly straightforward, but could be complex for those without Cisco experience. The web-based interface of the controller is akin to other Cisco products. All the controller and access point settings are highly configurable and customizable. The Cisco AP performed anywhere from 4% to 22% better on our throughput tests than the Ubiquiti AP.

Ubiquiti provided its UniFi AP-AC and the free UniFi Controller Software. The access point has a 2.4GHz radio and 5GHz radio with three spatial streams, supporting up to four BSSIDs per radio. Both radios have integrated omnidirectional antennas with a maximum transmit power of 28 dBm.

Unlike Cisco and other traditional Wi-Fi solutions, Ubiquiti’s UniFi system is designed to be managed using their virtual controller software. Once the controller software is installed on a non-dedicated PC, Mac, Linux computer, or in the cloud, the web-based controller interface can be accessed by any device.

The UniFi AP has a similar physical build as the Cisco AP: a rounded-square panel, but has about half the depth. It weighs just over a pound; much lighter than the Cisco AP. On the front of the access point is a unique LED status light outlining a square in the middle. On the back you’ll find a reset button and two Gigabit Ethernet ports: a main and a secondary. There’s no separate power input; it supports 802.3at Power-over-Ethernet+ (PoE+) and comes with an injector.

The access point setup and configuration process was simple and straightforward. Once you install the UniFi Controller Software on a computer you can access the web-based interface to run the setup wizard that helps you set an admin login and configure the access points with a secure SSID and optional guest SSID.

The admin interface is user-friendly and intuitive, even for those without enterprise-level network experience. Though it doesn’t allow you to configure as many settings as other typical enterprise solutions, it does allow you to apply general wireless, network, and guest settings across multiple UniFi APs. It also allows you to place access points on an uploaded map and view statistics information on access point and client usage. Plus it offers various integrated guest/hotspot authentication capabilities.

For the performance part of the testing we used IxChariot to run throughput tests on both access points with two different clients: 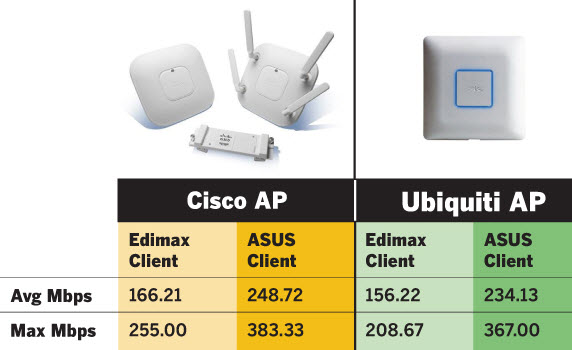 We ran the tests with the IxChariot High_Performance_Throughput.scr script for one minute with each client individually in the 5GHz band. It simultaneously tested both the TCP uplink (client to access point) and downlink (access point to client), which we add to show the total simultaneous throughput. We ran each access point/client test three times and recorded the average and maximum throughput seen for each.

Wireless throughput tests can dramatically vary between different clients and test plans. Although we came up with fairly low throughput results compared to what the vendors and other testers said they’ve seen with 802.11ac, this test still serves as a valid comparison test as both access points were tested with the same test plan. Testing with different types or numbers of clients, different traffic types, and using a different test infrastructure and environment can produce much higher or lower results.

During our tests we found pros and cons of each access point. For instance, the Cisco AP performed better in the throughput tests and provides a feature-set and configuration process comparable to other enterprise-level access points. The Ubiquiti AP didn’t perform quite as well and lacks much of the advanced enterprise settings, but is easier to setup, especially for those that lack true enterprise-level networking experience.

My recommendation if you’re picking between these two access points would be to use Ubiquiti for small or midsized networks and Cisco for larger enterprise networks.