You are here: Home 2013 September Cisco: Internet of Everything Router is Revealed

Preface: The new network device, the Cisco’s Internet of Everything Router, aims to address the explosive growth in Internet traffic via cloud, mobile and video.

Cisco unveiled its Internet of Everything router this week. The router is a device that intended to address the growth in Internet traffic brought about by cloud, mobile, video and machine-to-machine communications. 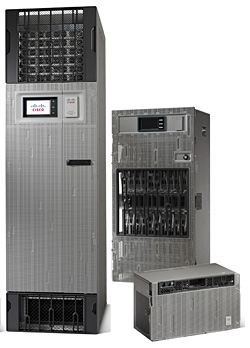 The expected Network Convergence System (NCS) is the culmination of three years of work by 450 engineers and $250 million in funding, Cisco says.

The system is not a core router like the Cisco CRS, or a successor to the CRS, the company says. Rather, it is a network fabric designed to scale CRS cores and ASR 9000 edge routers in service provider networks from centralized systems to distributed architectures able to accommodate the growth of Internet connected “things,” like cars, homes and machines.

Cisco expects trillions of these device-driven events to come online in the next decade, a situation the company refers to as the Internet of Everything.

Cisco says it plans to equip the CRS systems with the nPower chip as well to improve scale and introduce programmability into the platform for core routing requirements.

Cisco says the NCS can transport the entire NetFlix library in less than one second in a full multi-chassis deployment. It converges IP and optical networks in the service provider realm with Cisco Unified Computing System (UCS) server and Dynamic Fabric Automation networking in the data center to serve as a “central nervous system” for a programmable infrastructure founded on the nPower chip and onePK APIs in Cisco operating systems.

This “central nervous system” is designed to shift and redirect data center, core, edge and optical resources in real-time to speed service rollouts and reduce operational cost and complexity, Cisco says. This is enhanced through virtualization capabilities in system software that elastically scale up and down network and compute resources, and manage multi-chassis configurations as a single system.

If system scale is exceeded in one part of the network, NCS moves control plane functions onto UCS servers in the data center, Cisco says. NCS can also harness distributed Network Functions Virtualization (NFV) and other Cisco virtualization mechanisms to enable cross domain function orchestration and service placement where required, the company says.

Analysts say the fabric and programmability of NCS will turn up the competitive heat with Juniper’s PTX and Alcatel-Lucent’s 7950 XRS routers.

“All of the benefits and advantages on why customers wanted a fabric in their data center, the next logical step is to extend those to the WAN–a WAN fabric that is capable of virtualizing with a platform, with southbound and northbound API’s that allows programmability of the network ,” says Ray Mota, founder of ACG Research.

NCS 6000, which is shipping now, is capable of 5Tbps per slot and 1.2Pbps per system capabilities, Cisco says. It supports IP/MPLS routing, as well as single, back-to-back, and multi-chassis configurations.

Note: This article, written by Jim Duffy, is originally published on www.networkworld.com.