You are here: Home 2014 February Cisco ACLs In and Out on Cisco ASA

The issue of Cisco ACLs in and out may frustrate many users of Cisco hardware. When to apply ACL in or out of an interface? We will share an experience from a guy who usually works with firewalls. Let’s check what are his ideas on The In’s and Out’s of Cisco ASA ACLs.

Access Control Lists (ACLs) are typically applied to inbound traffic on an interface on most firewalls; however you can have an ACL applied to outbound traffic. Some firewalls obscure this a bit and have you select the interface name where traffic is coming from and where it’s going to, on a Cisco ASA however you would apply the ACL either “in” or “out” of an interface.

Essentially you just need to visualize where the traffic is coming FROM and where it is going TO in relationship to the interface you are applying the ACL to. Let’s take a look at an example; this is a fairly generic example you might see on most any Cisco ASA, we are applying an ACL to the “outside” interface for all “in” bound traffic to the interface, which is it is limiting traffic generated coming from one direction to another which will later be defined in the ACL itself:

access-group acl_outside_in in interface outside

Now the “outside” interface here is nothing more than the name given to a physical port on the ASA so it really could be anything.  In your ASA config it would look something like this:

If we changed nameif to homersimpson then the ACL would very simply be:

The ACL name, “acl_outside_in” is also just a name that you give to the ACL, so again we could just as easily called the ACL “familyguy” which would turn the ACL into:

Typically ACLs and Interface names are descriptive of their purposes, unless you subscribe to the “security though obscurity” practice. Other than ensuring you are using the correct ACL and Interface name (because then it would not work), the only item left in the ACL is really the “in” or “out.”

Now, you would define the where the traffic is coming from and where is it going to.  To build on the above example, let’s allow anyone on the public internet to access a server with an IP address 10.0.0.10 behind the firewall on port 443 (NAT is handled separately).

What we have done here is said to allow traffic FROM anywhere TO 10.0.0.10, using a full subnet mask limits it to the specific IP address and eq defines the specific port.  You can continue to create rules in this manner and they would be applied in a top down manner until you reach your default deny rule.  A default deny rule is typically present by default to deny all traffic, then you explicitly permit specific traffic.

Looking at it graphically; 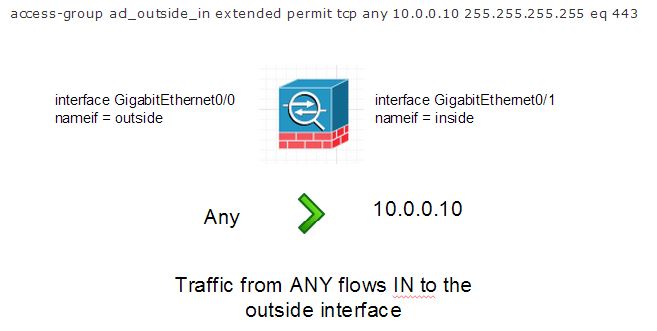 If you wanted to apply an ACL to another interface, let’s use the example of an interface named “inside” to filter traffic going out to the internet you might think that would be applied “out” like in the example below:

access-group acl_inside_out out interface inside

access-group acl_inside_outbound in interface inside

Because the traffic is coming from the inside network IN to the inside interface. Let’s look at an actual ACL example that allows a server connected to a network segment on the inside interface to have outbound access on port 443, that is the host specified in the ACL could access any website/service running on tcp port 443.

The visual would be:

So now we can get that the direction in which the ACL is applied has to do with the direction the traffic is flowing and to which interface.

More Cisco ACLs In and Out Topics:

Cisco ACL In and Out Questions