You are here: Home 2016 September How to Form a Stack-Wise and Power-Stack with Cisco Catalyst 3850?

How to properly form a stack-wise and power stack with Cisco Catalyst 3850 switches? It also shows the use of some commands that will help to troubleshoot why a stack is not forming properly.

In order to be able to form a switch stack more than 2 switches must be used.

The IOS version used must be the same for all switches. (Software auto upgrade can be configuring on an existing stack in order to automatically upgrade newly added switches).

So besides the Cisco Catalyst 3850 switches, you should prepare the Cisco 3850 Stack wise cables and stack power cables

The example below, shows how to properly connect a stack of six 3850 switches, together with a power-stack connection example.

Each switch has two stack-wise ports (left); let’s name the stack wise ports P1 and P2 as shown in the picture. 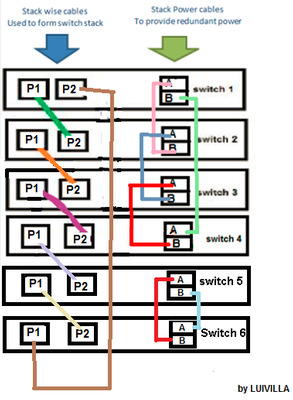 Picture 1 Switches in a stack.

Below the steps that show how to cable the stack for power-stack configuration:

Each switch has two power-stack ports, let’s call the ports A and B (A top, B bottom)

Note: Be aware that currently up to four switches can be used on a power-stack configuration and up to nine for a stack.

Adding a switch to the stack

Note: The switch to be added to the stack must be off. Otherwise, the hole stack will reload.

1. Add the new switch to the stack by connecting the stack cables to the switch (every cable has a cisco logo on the connector, it must be in the upright position) as shown in the picture below (1): 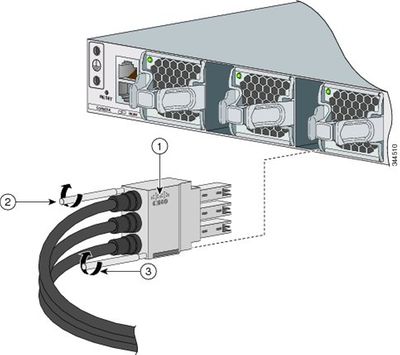 How to connect the stack-wise cable (Data cables)

2. Once the stack-wise cables have been properly connected to the switch, power on the newly added switch either using the power supplies or the power-stack cables.

After the switch has come up, collect the following :

On the show switch output verify that the current state of all switches is READY.

On the show switch stack-ports verify that all the ports are shown as OK, that is an indication that the stack-wise cables are working properly:

With the show version command, verify that all the switches on the stack have the same IOS version installed and that all of them have the same mode install or bundle.

This can be due to a cable not properly connected or to a faulty stack port on the switch:

It can be due to a version mismatch, make sure that all the switches on the stack have the same IOS image.

The auto-upgrade feature can be configured so everytime a switch is added to the stack this will be automatically upgraded to the IOS version used on the stack.

It might be due to a license version mismatch, verify that all the switches on the stack have the same license level.

The license level can be verified with the show licence-right-to.use command.

Some Discussions/Questions about the Cisco 3850 Stack

A: It should be possible to stack both switches without problems (WS-C3850-48P-S) with (WS-C3850-48F-S). Just make sure that stacking cables are properly connected and you should be good to go.

What I mean is that in order for a stack to be formed two or more switches need to be properly connected. Therefore, yes you should be able to connect only two switches on a stack.

Q: Is there any kind of configuration that we have to complete to form the stack in 3850 switches or will switches automatically sense the cables and make stack?

A: As long as the stacking cables are properly connected between the switches the stack should form automatically. And no special configuration is needed for them to work as stack.

A: Since the stack is already formed and working properly the missing cable (from switch 1 port 2 to switch 4 port 1) can be connected and should cause no issues.

The original guide and discussion from https://supportforums.cisco.com/document/12575126/how-form-catalyst-3850-data-stack-and-power-stack